After weeks of planning, thinking, ordering, researching, ordering more, then finally planning even more, work has begun in earnest on our first brewery control system. I for one, could not be more excited.

It’s still a ways from being complete, but thanks to a day off on Wednesday following a long week of travel, a good dent has been put into its construction. 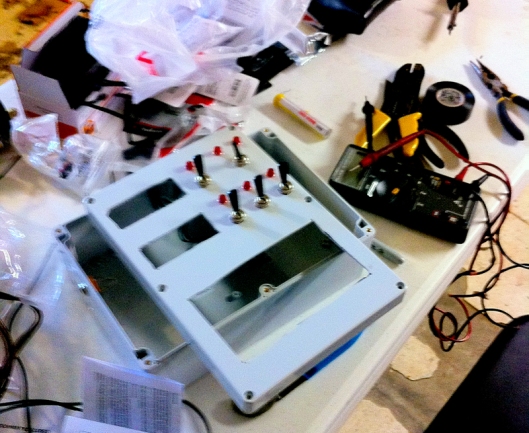 So what is this thing going to do? Well I’m glad you asked.

In essence, this hodge-podged together box of electrical components will allow us to take a giant leap forward in our brewing. Or at least that’s the theory.

It will make brew days much easier, allowing many of our systems and processes to be controlled from a single point. It will also make our process much more consistent, eliminating much of the human factor that can make a huge difference on the final product from brew to brew.

This won’t be the shiniest or fanciest brewery control panel ever made, but it will be pretty darn cool. I mean seriously, just look at these lights! Twinkly!

So what specifically will this panel do? Again, glad you asked.

The panel will have two temperature control units built into it. The first will control the temperature of the wort in our mash tun. Typically we try to keep things in the MLT around 153 for about an hour. Currently, we do this by pumping in hotter than 153 water, adding our grain, and then recirculating it through a heat exchanger as necessary to maintain heat. This has worked, but by only recirculating to heat things up, there are lots of time where the wort just sits in there, and the temperatures can become inconsistent throughout.

While many brewers are okay with this, I am of the opinion that constant recirculation is a good thing. Currently to do this, we have to constantly open and close a series of ball valves, using our existing temperature controller as little more than just a thermometer. A very expensive thermometer.

This has worked, but again, this introduces too much variance from brew to brew as the success of this method is highly dependent upon one of us paying attention. This is not a strong suit of ours. Just being honest. Between the other brewery functions that we typically try to multitask on a Friday night such as bottling or kegging, and general tomfoolery, there have been quite a few times where we accidentally left things recirculating for too long down the wrong set of tubes resulting in a wort that was too hot or too cold for proper extraction.

While this has been fine for individual batches, consistency is something we must strive for and achieve if we are to ever reach our lofty goal of becoming a professional brewery. Enter our new control panel.

The temperature controllers we are using in the new panel each control two circuits. One for heating and one for cooling. This allows us to connect electric solenoid valves to each of the respective circuits, replacing two of the existing ball valves coming off our march pump. When it’s time to heat, the solenoid leading to the heat exchanger will open. When the ideal temperature is reached, that solenoid will close and the one for recirculation will open until it’s time to heat things up again. This cycle will repeat as much as necessary throughout the mash process. As a result, our MLT temperature should stay constant with next to no human intervention.

Another new feature of the control panel will be the ability for us to switch our pump on and off automatically based upon liquid levels in our lauter grant (which I kind of explained in my last post). This will be a great addition to our system, as it should really improve the clarity of our wort runoff.

Here’s a glimpse of how all that will work: 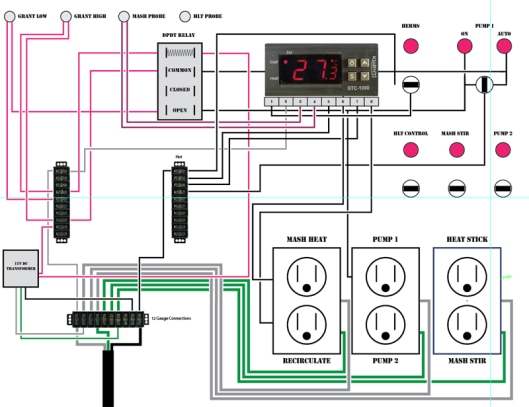 While we are speaking of mash, another function of the control panel will be to switch on and off a new (still to be constructed) mash agitation system. Up to this point we have been using a paint stirrer attached to a power drill to give the wort the occasional stir during mashes. This again is an area of human intervention that varies too much from batch to batch. How often we stirred has varied, as has the intensity and the length of said stirs.

To address this issue, we will be adding a constant agitation system to the mash tun. A high-torque, low RPM motor will constantly stir the wort throughout the mashing process. Propeller like blades will cut through the mash enough to create a small bit of constant motion, but not enough to aerate it. This system will be controlled through a switch on the control panel.

Another key feature of the new panel will be the ability to more precisely control the temperature of our sparge water. Currently we use propane to heat our brew kettle and our hot liquor tank. This works, but direct heat is not the most precise of animals to work with. As such, sometimes our sparge water is right where we want it to be (usually 168 F). Other times, not so much. Again, human variance.

To fix this, we will be constructing a portable, submersible heating element, often called a heat stick in brewing circles. This implement of scorching heat will be generated by a 1500W water heater element attached to a bit of pipe and extension cord. It will be placed into the hot liquor tank, and will be switched on and off as needed by a second temperature controller on the new panel. Once the stick is in the water, we just set the desired sparge temp and forget it. Other than an occasional stir of the water, the panel should do the rest.

So that’s the basic gist of it all. No telling yet if any of it will actually work. I think it will, but lord knows I’ve been wrong on more than a few occasions in the past.

1 thought on “Busting out the Brew Tech!”