In the wise words of the great Fred Durst (LOL) “just think about it.” So Fred Durst, of Limp Bizkit “fame,” is neither wise nor great, but I came across a picture this morning that invoked some thought. 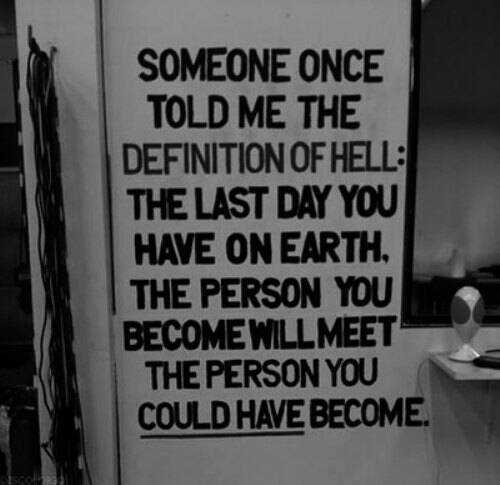 To me this is the most profound definition of hell I have seen to date. Most traditional definitions involve fire and torture, a way to deter God fearing individuals from doing bad things.

Personally, I’m not a very religious person so this definition speaks volumes to me. Does it make me want to work harder to achieve my goals to avoid this kind of hell? Not really. I think it’s meant more to inspire. Think about your potential and make something happen. The whole “no regrets” mantra.

The major plot hole in this picture is it can be taken two ways. Yes it would be hell for the lazy guy or crackhead who did nothing with his life to see himself with a loving family, successful career, nice things and the admiration of his community. On the flip side, it could be heaven for the motivated guy who achieved the loving family, had a successful career, all the nice things and the admiration of the community to see how he could have been the lazy guy or crackhead if he had made one different decision.

Like Fred Durst said in his hay day, “just think