Next to brewing beer…and spending time with my daughter…and playing hockey… and playing disc golf…probably my most favorite way to spend my time is in front of a fire cooking up tasty cuts of meat.

While I am no beer snob (except for PBR and Stag…both of which roughly taste like what I imagine cat piss would taste like), I am very much a barbecue snob. I won’t even abbreviate it. I punch myself in the leg every time I catch myself using it as a verb. It’s nothing I take lightly.

Low and slow is a mantra I live by when it comes to cooking meat. I’m not going to knock anyone who cooks on a propane grill…Justin…but I will say that it just isn’t for me. While I appreciate the convenience of being able to put meat on the grill minutes after lighting it, I don’t cook for convenience. If I were, I’d just use the oven or George Foreman’s Lean Mean Grilling Machine.

The extra time and effort are more than justified by the final product. You just can’t beat good, properly smoked, barbecue. Beyond the taste, there are very few ways that I prefer to spend my time than manning my smoker.

Sunday was Mother’s Day. Lucky for me, my wife loves good barbecue as much as I do. As such, she left her Mother’s Day meal up to me.  I decided to try something I hadn’t tried before. Instead of smoking a large cut of meat, I opted to go with something smaller – Strip Steaks.

Steaks aren’t something you usually smoke. The meat is usually pretty tender already (with a few exceptions) so it doesn’t need the low and slow approach to bring the best out of it. As such, most people usually cook steak over direct flame. Myself included. It’s the only way that you can get those nice grill marks, and that tiny bit of crunch on the outside. The only downside of doing it this way, is that you don’t get that full smoke flavor that you can only get by fully immersing it in a cloud of mesquite for a prolonged period of time.

I wanted the extra flavor, and I wanted the marks, so I decided to try something a bit different to get the best of both worlds. I would smoke it, then sear it. Which is the reverse of how one would normally do this kind of thing. Typically you sear first, to lock in the juices then bake until done. But doing so would make it more difficult for the smoke to penetrate the meat. Some might counter this by adding some liquid smoke to the marinade…but not I. I think that stuff is for cheaters. If I want smoke…I use smoke.

My plan of action was set. Succeed or fail…this is what I was going to do. But first…there was marinading to be done.

I like to use beer as the core of all my marinades and injections. This case would be no different. I used our Hot Blonde Jalapeno Ale as my base, and then added some additional liquids and spices to bring even more flavor to the party. I considered using the Smokey Grove, our smoked apple porter, as I usually prefer darker beers for marinading,  but decided against it…as this might be too close to liquid smoke for my comfort. 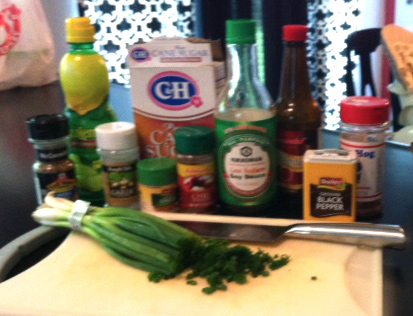 Look at that marinade simmering in the pot. Yum. 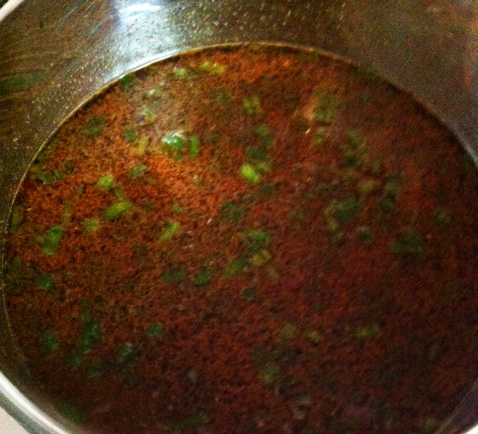 Here are the steaks before adding the marinade:

Once that was done, I wrapped up the pan and let the steaks soak up the goodness for a few hours.

In the mean and between, I spent some great time with the wife and kiddo. We ran a few errands as a family and got some play time in as well. Once the baby was tucked in her crib for the night, it was time to come back to the steaks. I lit a chimney of lump charcoal, got the smoker up to temp, added a few chunks of mesquite and let the thin blue vapor of burning wood do its thing.

While that was happening, I figured I might as well turn my attention to another project: the construction of my hop trellis. I know this may seem like an odd thing to tackle on Mother’s day…but I was already outside, and I smelled like smoke, so it’s not like the wife was going to want to cuddle up with me on the couch anyways. Plus, she was enjoying a bit of down time to enjoy some girly shows on TV. No sense interrupting a rare moment of peace and serenity.

I will admit. I kind of stole my idea…though on a slightly smaller scale…from Kai Brewing. If you are thinking about a similar endeavor, I recommend checking out their site for instructions, as mine will be much less detailed.

First, I dug a hole as deep as I could with just a small shovel and a garden trowel. If I had a post hole digger or an auger, this would have been easier…but I didn’t so I made do. To provide additional vertical support, I drove a copper pipe down the middle of the hole several additional feet. I then slipped a section of 2″ PVC over the pipe, hammered it down about another foot, and then filled the hole back up. 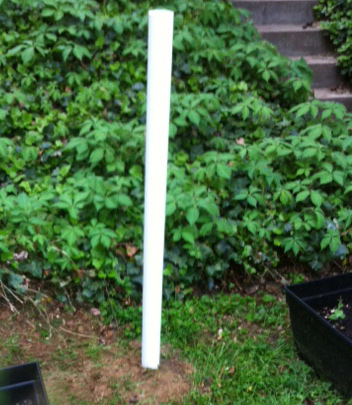 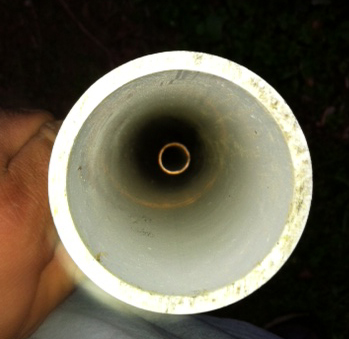 I used 1 1/2″ PVC for the rest of the project. A long section for the vertical pole, and two 3′ sections glued into a T for the horizontal bar.

I drilled a few holes into the cross bar sections, and ran eye bolts through them. I then put everything together and ran Jute twine from the eye bolts to the pots for the hop bines to climb up.

Here’s what it looked like when I was done: 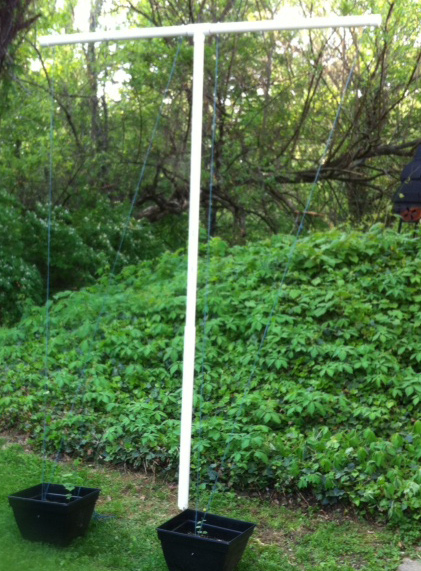 Sadly, as I was finishing this project the sun was already beginning to set. And by the time my steaks were done smoking, it was already dark outside. I tried to take good pictures but they all came out crappy…even crappier than my phone usually takes. So I can’t show you how the rest of the cook went, but I will tell you anyways.

I left the steaks in the smoker until they reached an internal temperature of about 120 F. At that point, I finished them up directly over hot charcoal. Just a couple minutes at the 10 o’clock position followed by a couple more at the 2 o’clock yielded a beautiful set of grill marks and a perfect medium temperature.

I guess I could have took a picture or two of how they looked when I brought them in the house…but I didn’t. My bad.

Rest assured…they were damn tasty and worth every bit of effort. The wife enjoyed them too and was extremely happy with her Mother’s Day feast.

All in all…not a bad way to spend a day.