I feel kind of embarrassed for not realizing it sooner, but Regular Guy Brewing just marked its first year of brewing awesomeness. Happy Birthday to us!

Well technically, our actual birthday was in July, but better late than never.

Ahh yes, I remember it well. I remember meeting up with Brian that fine Sunday morning so that we could run to Lowes and purchase a turkey fryer to use for our first burner and kettle. I remember going to Justin’s and setting up our equipment, and how annoyingly long and unnecessarily difficult it was to put the burner together. I remember the annoyance of running out of propane halfway through the boil, and having to make an emergency run for more. I remember how painstakingly long it took for us to chill our beer to fermentation temperature in the Summer heat.

I remember how new it was, particularly for Justin and Brian, and how excited they were to experience the hands-on joy of brewing beer. And I clearly remember the camaraderie that we all felt in sharing that awesome morning of zymurgical wonder. 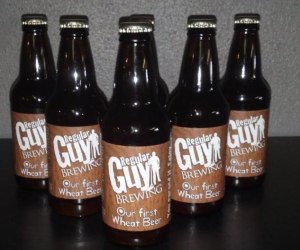 It was a good day. The beer? Not that great. It was an extract kit that I had been given as a birthday present the month prior. It was a dark wheat beer. Not bad…but nothing special.

Or so I had thought. As it turns out, that first beer was a critical stepping stone. It set us down a path, that I hope we won’t turn off of for a very long time.

Ultimately, I am supremely confident that we are taking great steps in the right direction, and I am excited to see how far this rabbit hole goes.

Enough of the sentimental crap…IT’S TIME FOR AN UPDATE!

Last weekend Brian and I were able to bottle our second batch of Hot Blonde. It turned out a shade or two darker than our original Jalapeno ale, but it tastes just as good…if not better.

It’s smooth as it goes down, with a hint of the sweetness of the Jalapeno. That by itself is darn good….but then if you wait for a second or two…here comes the heat. Not an overpowering heat, but a satisfying mild tingle at the back of the throat. It is really, really good.

On top of that, the carbonation on this batch is spot on. The first time we brewed it, we overshot our desired carbonation level and we ended up with bottles that would occationally shoot beer to the ceiling when you opened them. Pouring a glass of that batch would require the patience of a saint, as waiting for the head to recede enough to pour more might take a half hour or more. Thankfully, the beer was good enough that it was well worth the wait.

No waiting though on this batch. It is pleasantly effervescent, with a nice foamy head…but it pours easy…and drinks even easier.

On the heels of that victory, we turn our eyes to several new recipes that we have in the works. First at the plate, a Red Rye Ale that we will be brewing tonight.

I am really excited about this beer and I really hope it turns out as well as it already tastes in my mind.

I really have become a huge fan of rye as a beer ingredient in the last couple years, and while we have used it a little bit here and there, this will be the first time that we brew a beer that features it as it’s key flavor profile.

And maybe we are putting the cart ahead of the horse, but we are so confident that this beer will be a winner, that we have already come up with a name and label design for it.

And just to wet your apetite and satiate your curiosity, here are some of the other beers that we will be brewing and experimenting with in the coming months:

(Yes, that is what we are planning to call it.)

The Apple Smoked Porter is on the docket for next weekend. After that we will work our way through the various recipes to see what works and what doesn’t. As long as we continue to learn from each brew, whether the final product is a hit or a miss, it will be time well spent.