Before I delve too deeply into the dulcet tones of my own typing, let me take a moment to issue a sincere apology for not blogging much (at all really) over the course of the last few months. I don’t really have a good reason for my online absence, so please let me offer a few completely fabricated and generally nonsensical reasons for my lack of writing:

So now that those feeble excuses are out of the way, let’s turn to the here and now.

From skiing and snowboarding to luging and bobsledding, I love them all. It doesn’t matter what the sport is, I will watch it from beginning to end. 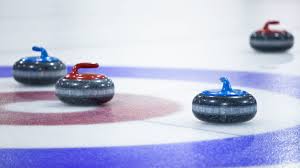 Seriously, I just CAN NOT GET ENOUGH CURLING! I will set the DVR in the morning, and when I come home, I will just sit down and zone out to that beautiful roar that can only be made by a 42 pound hunk of granite sliding down a freshly pebbled sheet of ice.

I will spare you the ins and outs and the various nuances of strategy that really make the game intriguing…and believe me, I could go on about it. Ad nauseum. For hours on end. Next to beer, and Canadian toilets, curling is one of my favorite things to talk about.

But there are a few things that I do think are worth pointing out that make the game pretty awesome.

First off, I would be remiss if I didn’t point out two of my absolute favoritist things about the Olympic curling competition.

I love how these guys don’t take themselves too seriously. How can you not love a game where teams are still able to have a bit of fun and spoof themselves while playing at the highest stage in the world? 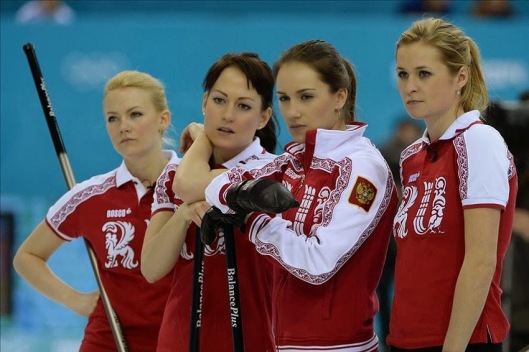 These girls are doin’ it right. Nuff said.

What do I love most about curling? The fact that of all the games in the Olympics…Winter and Summer…it is the one sport that just about anyone could conceivably be good at.

Anybody can curl. Old, young, tall, short, thin, wide…it DOESN’T matter. Anyone can do it, and anyone can have fun at it. You don’t need thousands of dollars worth of equipment. You don’t need a giant slope. You don’t need a fancy four man sled. There’s no spandex. No sequins or rhinestones. Assuming you have access to a proper facility, all you need is a broom, and those are often provided for you.

More than that, even at the Olympic level, curlers are not what you would typically term as elite athletes. They aren’t chiseled out of pure muscle. They are just normal people, most of whom still work full time jobs. They are teachers, bankers, mechanics, bus drivers and janitors.

It’s a game that was practically made for…the Regular Guy.

See how I did that? Brought it back to the brand. Yup. That’s right…Regular Guy Brewing is like the curling of beer.

There are a lot of craft breweries out there and more and more are popping up each passing week. We hope to be one of them in the relatively near future. But what seperates us from the rest, is that we aren’t trying to dazzle you with some crazy triple 1080 backflip with a McTwist of hoppiness. Nay. We aren’t snobs like that. Our beer will be easy to drink and even easier to enjoy.

We seek to brew our beer for the Regular Guy, cuz that’s who we are. We aim to make beers that anyone can enjoy. White collar, blue collar, it don’t matter.We’re cool like that.

Yes, you want good beer. After all, you’ve earned it. But you should also be able to enjoy it without having your mouth raped from hops or overly fragrant fruit additions. We’re not going to insult you or your palate. We know you like and want good beer, so why muss it up by going overboard.

We want our beers to be unique and flavorful but still palatable. You already finished your work for the day. You shouldn’t have to put effort into finishing your glass.

Regular Guy Beer will be the kind of beer, regardless the variety, that you can enjoy after a long day at the office. The kind that you can pop open and tip back while watching a bit of curling…or hockey…or football…or baseball…or mud wrestling…or whatever else floats your boat.

That’s our promise to you. We look forward to fulfilling it.

Oh…and while I have your attention, be sure to like us on Facebook. It will make Justin’s day: facebook.com/regularguybrewing