Hey America! I’m talking to you! It’s time to wake up!

This morning, while doing my usual perusal of the internet, I came across something that really irked me. While I am fully cognizant of the fact that it doesn’t take much to leave me feeling a bit perturbed, this one actually stung a bit.

If you have even a shred of decency within you, you too will feel my outrage.

I present to you…”American Theme Parties.”

Here’s the premise in a nutshell: People in other countries are coming together to throw themselves the occasional shin-dig with an “American Theme.”

What, you might ask yourself, comprises an American theme?

Apparently, or as far as I can tell from this article on BuzzFeed and this one on Yahoo, to act like an American, you must: 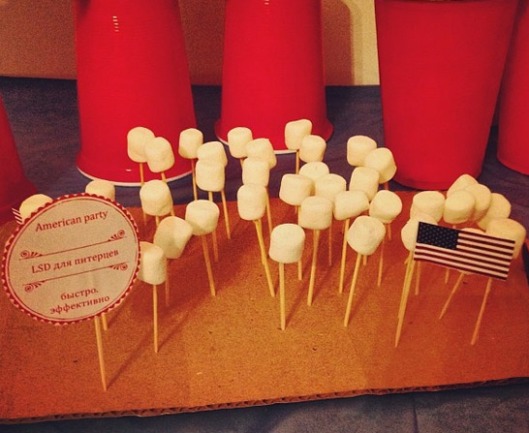 Before I fully devolve into ranting madness, let me state upfront that I get that these are just characterizations of our society and that the things that they have plucked from our popular culture are not representative of the mass. Likewise, I know that these are just stupid kids having a good time. For that, more power to them.

I am a firm believer that perception is truth. If someone sees or hears something, and they think it’s true, then it might as well be the case. The catch though, is that these perceptions have to come from somewhere. They aren’t just conjured out of thin air.

Perceptions, no matter how ill conceived and non-representative they might be, that American’s are just a bunch of brash beer guzzling hoosiers who live in trailer parks chowing down on nothing but greasy sandwiches and marshmallows, would not exist if there was not at least a small premise for them.

And where do these ideas come from? I first point the finger at popular culture.

Our popular culture is chock full of the most low brow entertainment that anyone could ever imagine. We make stars out of the trashiest and idolize the generally worthless.

Shows like Honey Boo Boo, Toddlers and Tiaras, Sister Wives, the Jersey Shore, the Real World, Real Housewives, Mob Wives, and and the countless other “reality” shows that litter the programming of MTV, TLC and Bravo present a clear cut message: American’s are crappy human beings.

Our televisions are full of this crap. It’s not even quality enough to be considered low brow.

And we can’t get enough of it! We as a society have developed a serious obsession with watching the worst that our culture has to offer be terrible people. The more that we watch, the more shows of this kind will pop up. Television programmers are lazy individuals. If one show works, they will just pop out 73 incarnations of the same thing just with slightly different people. Maybe instead of a redneck that lives in a trailer park, the next version will have a guido at a beach house, or a diva in a mansion. Boil it down though, and its all the same: worthless people being worthless.

We’ve made the math far too easy for them. Trashy people + television cameras = RATINGS! Throw in some booze, a bit of nudity and the occasional trip to jail, and damn…you’ve got a hit on your hands!

Which is why I am pointing a second finger at ourselves as a Society.

These perceptions of our Society would not exist if we didn’t embrace them ourselves. We buy crappy music, go to crappy movies and watch crappy television. In doing so, we are just rewarding the makers of crap for their crappiness and perpetuating the cycle of crap that we have embedded ourselves within.

The result, I fear, has been a vast erosion of the intelligence of this once great nation. We are losing our sense of decency. We deserve better.

It’s time to put an end to the mass stupidification of our society and step it up a notch. Instead of sinking deeper into the every increasing depths of our own depravity and general worthlessness, maybe we should make an attempt at something different…pride.

I’m not saying that everyone should only listen to NPR and watch PBS. Far from it.

What I am saying though, is that it is high time that we start to take stock in some of the choices that we make and to take steps to better ourselves as individuals and as an aggregate.

One great place to start is beer. Some say that math is the universal language, but I beg to differ. To me, there is no greater unifier within this world than good beer. It is a substance that is as old as civilization itself, and no matter where you go around the world, you will likely find a beer like beverage being made.

When I want a beer, I reach out for a craft brew because I know that the maker of that beverage made it with a great deal of pride. He or she put their heart and soul into that beer, and when I take a drink, I am sharing that experience with them.

So put down the red solo cup and pick up a quality craft beer. Your taste buds, your sense of pride, and your nation will thank you for it.