I learned something this week. It’s something that I probably should have known…but I didn’t. I feel shame for that. I take great pride in my knowledge of all manners of esoteric facts and figures, but this one slipped past my radar. 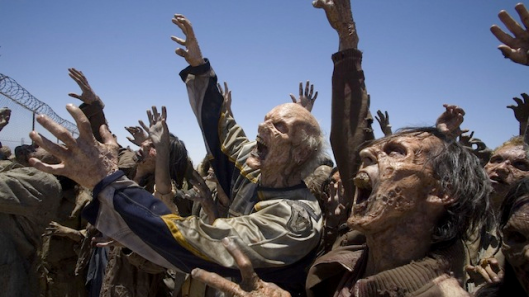 Are you now aware? I know I am! Well played…May.

Zombies are so darn vogue right now. They are featured in multiple television shows, movies and countless books and I have by no means been immune to their media charms.

More than that though, I am not the least bit ashamed of the hours of my life that I have devoted to the notion of Zombie preparation. While I don’t believe the zombocalypse is coming anytime soon…you can never be too safe. As such, I have emergency supplies squirreled away in several key locations to aid my survival if such an event does occur.

And if it doesn’t…and a tornado or something of the like does instead…then I guess I’ll be set for that too. It’s good to be prepared.

But it doesn’t stop there.

Brian, Justin and I have had many nights where we hypothesized the various scenarios and devised plans for our mutual survival based upon each of the potential contingencies. One plan for slow lumbering Romero style zombies, a very different plan for fast and rage-fueled 28 Days Later style zombies. Responsibilities have been divvied out accordingly, and with any luck, we and our respective families will persevere.

It’s fun to think about…in a sick and twisted way…but there’s a different kind of zombie that we failed to ever consider.

Over the last few months, all three of the Regular Guys have pretty much been running on fumes. Our jobs have had us stressed and busy. Household projects have kept us tied up at home. We’ve hardly had enough left in the tanks to be good Dads and husbands as of late, let alone have energy to focus on our beer brewing. We have gone weeks at a stretch without even seeing each other…which is totally bizarre for three guys with such a deep bro-mance as ours.

We had become zombies.

Thankfully…dispatching the “Working Dead” is much less bloody than disposing of the “Walking Dead” It doesn’t require any ammunition and you can leave your machete at home. Breathing life isn’t a matter of reanimation…it’s ultimately just a matter of doing.

There’s no better way to feel alive, than to do things that excite and interest you. I love learning about things. I love making things. I love beer. I love learning about and making beer. Brewing beer is not work to me. It’s a joy. It’s the perfect confluence of all the things I like about myself. It’s part creativity. Part strategy. Part art. Part taste. Part math. Part science. Brewing beer, well and consistently, calls upon all my strengths and interests, and really requires and prompts me to be my best and favorite me…or put more simply…

And as such, I can think of no better ways to wave “bye-bye” to our zombie alter egos than to brew up a new batch of Hot Blonde. In doing so, we shall let our mash paddle serve as our shotgun, and our refractometer be our baseball bat…and we will decimate the shit out of our zombie selves come Friday night.

So thanks again month of May for making me aware. Consider me better prepared for whatever zombies may come my way hence forth.